The reasons I love oats, are not based on any intellectual reason to do with their nutrient composition or versatility. But because every time I have a bowl of porridge or smell ANZAC biscuits cooking, I am transformed back to childhood and so many comforting memories, from parties with friends, the smell of mum baking in the kitchen, or even watching She-ra and other cartoons while eating breakfast before going to school 🙂

So when I began my Spring Pantry Challenge this week, and I set myself the challenge to clean out my pantry one shelf at a time and I started with the top shelf (where all the baking items are) I decided it was as good an opportunity as ever to make some ANZAC biscuits and in the process, share some of the other cool attributes of oats. 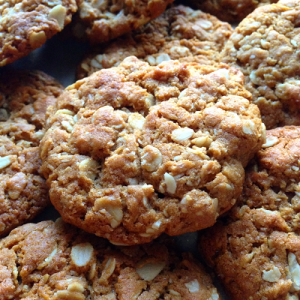 Oats are considered a colonic food (it’s a little different to a prebiotic in that pre-biotics only “feed” the good bacteria, whereas colonic foods feed the good bacteria, but may also be metabolised by the more “on the fence” bacteria. For people following FODMAPs diets though, oats are great because they are one of the options still on the menu to support the colon. In naturopathy (and Chinese medicine) oats are considered “supportive of the nervous system” and eaten as porridge they’re a good remedy for people who are weak and deficient. Interestingly one of my reference books says that oat water or porridge can “help ward off contagions” which sounds a little vauge, but might be explained by some research which shows the soluble oat fibre beta glucan may stimulate the immune system . In addition, beta glucan is also helpful for lowering total and LDL cholesterol levels. Unfortunately if you have coeliac disease or a gluten-sensitivity, oats are off the menu for you but don’t worry, we’ll talk about great gut foods for you when I get to that shelf of the Pantry Spring Clean:-)