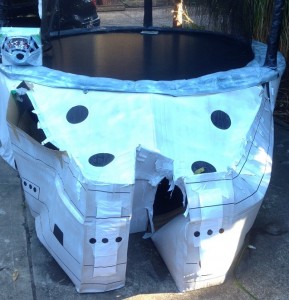 How our “Millenium Falcon” trampoline looks after this weeks storms and heavy rain.

I’m about to embark on a “Sneaky Leaky Holes” series and I’ll be honest, it’s really hard to decide which leaky hole to tackle first. So after a chat with Glenys  (a fellow naturopath, and co-cook on Alternative Chef Kitchen) I thought I’d get all naturopathic about it and well, just start at the beginning.

When we’ve got clients in clinic with tricky health histories and convoluted stories, one of the best techniques I learned back in Naturopathy college is to figure out when and how it all began to unwind by asking if they have a “never well since” situation ( I learned about this in a book by Leo Galland called The Four Pillars of Healing).

When it comes to the convoluted story of my health journey, well I was definitely one of those people who “was never well since…”. For me, I’ve had a couple of “sinces”.

The first real “since” was when I got Chickenpox from a family friend who was battling shingles. I was 20 at the time and visiting people to pass out invitations to my 21st birthday (luckily the doctor deemed me to be safe for the public on the day of my actual party;-) I’d just began my Honours project at the time. Traditionally in science Honours is a bit of a “trial by fire” year where working crazy long hours in the hopes of getting a First Class Honours grade is what is expected in some laboratories (sadly, I worked in one of these). But, I was young, fit and healthy. I had some odd digestive issues going on, food sensitivities (like dairy) as well as things like menstrual pain (which a decade later I learned was endometriosis) and migraines. So lots of little niggly things which could have impacted on my energy levels, but I was young, 21 and into fitness and health. My best friend and I would wake up at 6am and either do an exercise video or walk down to the beach and back (about 3k round trip) before going to uni. I went to Flinders University which is a big campus, so there was a lot of walking once at uni involved too. I was doing karate (and I LOVED it). I was an early riser and a night owl (because I’m a book addict and I’d stay up late reading). I drank a lot of coffee back then, but otherwise, I rarely drank alcohol, and had a pretty healthy diet as I lived at home and my mum cooked a lot of traditional meals (we lived the Mediterranean diet!;-)

It turned out that my Honours year was a crazy stressful busy year for a few reasons.  My sister was getting married, and there were other stressful things happening within the department and with other students.

Passing up my Honours thesis (an 80 page document about my research project) was the culmination of late nights and stress because like in year 12 where “everything” hinges on the 1 grade, Honours feels much like that. If you got a crap honours mark, no one would hire you, and you wouldn’t be able to get a scholarship if you wanted to go on to do a PhD. The pressure was crazy.

I ended up having to re-format the thesis 3 times and had to pass in the thesis a day late (due to computer glitches that happened twice using the computer and printer of the head of department – who was also the honours co-ordinator).

I’d wake though the night for a week or so afterward thinking “Oh I’ve got to find the reference for that section of the literature review!” Or “Check I included the right image here” etc.

So looking back with what I know now, it doesn’t come as a surprise to me that the next year was a “sick year”. I caught a lot of colds, my digestive issues played up, and the general feeling of “broken” happened. I didn’t have the same amount of motivation or “gusto” that I had before Honours and before the Chicken Pox.

The story doesn’t end there. I’d pretty much recovered by the end of that year and was feeling more like “myself” again until I got Glandular Fever (Epstein Barr virus and CMV at the same time) when I was 25.

It had taken awhile for the Glandular Fever to be diagnosed. My housemade at the time and I had been feeling generally crap with a really sore throat. She’d been saying that she felt so tired she could have slept at her bench and I thought I must have been getting depressed or something because I’d never felt so low in energy in my life.

I’d seen my GP at the uni health clinic and he told me I just had a cold and to go home and drink chicken soup like everyone else. He said, “I could run a couple of tests, but that would just be wasting the governments time and money”. So I sheepishly walked out of the office with the antibiotics and went home feeling like I was a hypochondriac. That was until I began itching. So much so that I was developing bruises. My arms and thighs were covered with them and I looked like I’d been beaten up. My housemate was horrified and so I went to see a different doctor at the clinic who discovered I had Glandular Fever and some “minor liver damage” from the antibiotics.

So the year after I had glandular was another “sick” year. There were big moves around the laboratory and within the department and with my supervisors and I caught everything going around. and my period pain was getting worse again. I just felt completely terrible and depleted. I ended up in the doctors office in tears saying “I can’t take it any more, I’m getting sick all the time!” And luckily I had a good doctor who ran some tests but got me on a multi and some zinc (which I was low in).

About 6 months later the doctor had moved away and I’d continued to have menstrual problems and my housemate suggested I see a naturopath (and the rest  as you know because you’re reading this is history;-).

Sadly that’s not the end of my “since” story. I have a few more “never the same since” situations, including since working in a pharmacy and since having children.

The combination of sleep deprivation and general busy-ness is not something I bounce back from as quickly any more. There’s also the added reality that there is just less “me” time in a day (but I’ll talk about how that becomes a leaky hole and is a bit of a “robbing from Peter to give to Paul situation” in the next post).

So do you have a “never been well since” situation? If you do, and you’ve got some niggly health issues going on, I think it’s worth chatting with an integrative GP and or naturopath who can take the time to look at your health history as a whole for a better picture of how many “never the same since” situations you’ve had.

I also think it’s important to look at our bodies and how we deal with stresses from that “breaking” point or “never the same since” situation onwards a little differently (for example, I’m not 21 anymore, I’m almost 38 there are lots of things that don’t happen as well as they did 20 years ago, like recoveries from late nights for example!!).  So the image I go with in my mind when I think of this, is of scar tissue. You break, you heal, but the skin that heals isn’t the same as it was before. The younger you are, the better and quicker you heal. The older, or if there are some other things going on, you just don’t heal as well as you used to.

Cool as the body is, scar tissue is scar tissue, it’s not the original tissue. So our expectations of how we are going to be after we “heal” might need to be a bit different than before. And my feeling (and experience) has also been that if the tissue gets broken more than once well, it’s not going to take as much to break it the next time. It doesn’t mean you won’t heal, but I think it means we need to be more mindful of the things that can “break” us and avoid the ones we can, and learn how to give ourselves enough time to heal from the ones we cant.

Anyway, if you liked this post, or you know someone who it will resonate with, then by all means share it and forward it on. If this is your first time finding me and you’d like more insights, musings and thoughts about this long term health journey, then enter your name and email address below to join my mailing list and I’ll keep you in the loop:-)