Ok… so last newsletter we brought up 3 things:

Did you have a think about why these might be? (If you can’t recall the table it is summarised here.

The reason for the difference between men and women (when it comes to iron anyway;-)
Iron is a very important mineral in the body, without it we wouldn’t be able to breathe. Because of this, the body has a very sophisticated method for recycling it and there are limited ways the body can get rid of excesses (eg. shedding skin, sloughing off cells in the intestine and urinary tract, loss of hair and menstruation) and so the main way the body regulates iron levels is through how much it absorbs from the diet (Mangels et al., 2011).

Hence because women lose more iron than men (due to menstruation), women of reproductive age and pregnant women have the highest requirements for iron, however, this is reduced once they have gone through menopause. Ok more about women and pregnancy later…

Ok so what was that 180% RDI column about?
In studies, the actual amount of iron in vegetarian compared to non-vegetarian diets is roughly the same (some studies show more, some less) however some studies indicate (through a marker in blood tests called serum ferritin) that vegetarians have lower iron stores than non-vegetarians (although they are still in the normal range)(Summarised in Saunders et al., 2012).
Also, if you recall from last newsletter, plant-based iron (non-heme iron) is less easily absorbed than heme (meat) iron. This is due both to the ways in which the body takes up the iron from the food and also due to inhibitors of iron present in foods and in the diet. 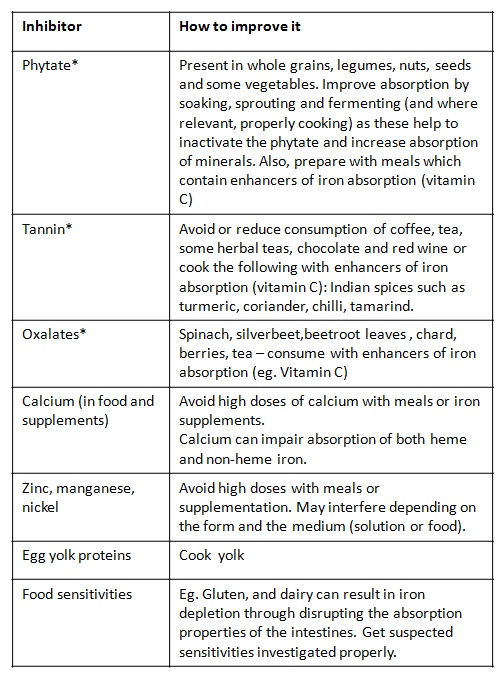 Inhibitors of iron absorption
*According to Saunders et al. (2012) the latest research shows that the presence of vitamin C (both synthetic or naturally occurring in foods) can help to overcome the effect of tannins, phytates, oxalates, milk proteins and calcium!
** References for the Table Gropper et al., (2009) and Mangels et al. (2010).

Ok so back to where that 180% RDI recommendation comes from.
So for these reasons and based on the findings from a study the United States and Canadian Institute of Medicine (IOM) set the RDI (recommended daily intake) guideline for vegetarians at 180% of the RDI for omnivores, and Australia has followed suit, although not all countries have (eg. the UK haven’t according to Saunders et al., 2012).

Saunders et al. the authors of the recent review in the Medical Journal of Australia (see reference list below for full reference) stated that they believed the research this was based on wasn’t actually conclusive as it was only based on one study which wasn’t looking at a typical Western vegetarian diet but was actually designed to reduce the absorption of non-heme iron and it contained limited amounts of fruits and vegetables (eg. vitamin C containing foods). So what is the actual answer? Do vegetarians need that much more iron or not?
The answer isn’t clear cut. Especially in the absence of more information and research. Why? (Because it is really really frustrating when you are looking for a yes/no “Just tell me what I need to eat and how much” type of answer) Because no one follows a text book (or in this case research study diet) in real life.This is a good time to talk about the pregnancy recommendation.

Pregnancy and iron requirements for vegetarians or vegans

For Iron during pregnancy the upper limit is set at 45mg. Yet the 180% of the RDI for iron as recommended for vegetarians is 49mg…(an upper limit is the highest daily amount of a nutrient that has been shown to pose almost no adverse health affects for the majority of people in a population). What does this mean in real terms? Well Reid et al. published a paper in 2012 where they aimed to determine if the nutrient reference values could be met through diet alone for vegetarians. The outcome was generally yes except for pregnant women, as they found the highest they could make the diet (without exceeding calories or sodium levels) was 36.6mg and so the take home message was that it wasn’t really a big problem in practice as the upper limit was unlikely to be exceeded by diet alone, and the deficiency (between what the diet could provide and what a pregnant vegetarian woman might need) could be made up via the amount of iron included in a general pregnancy multi (Reid et al., 2012).

The study by Reid et al. (2012) used a lacto-ovo vegetarian diet which also utilised soy foods and enriched foods in order to meet all the nutrient requirements (and not exceed some, eg. sodium). This brings us back to the research study diet vs the real life diet. “In real life” the things to consider (including if you are pregnant) are: exactly what sort of vegetarian style of diet you follow (if it omits dairy, eggs, soy or enriched foods the findings from the Reid et al., study will be less relevant. Another thing Reid et al. (2012) discuss is that everyone’s body can adapt to improve the absorption of certain nutrients to a different degree and so what might work for one person, might not be enough for another. In practice what this means is don’t assume. If you are following a plant-based diet that omits enriched foods or soy foods, and you’re feeling tired, get things checked out (eg. through a blood test)  before making assumptions about supplementation (and do this in consultation with your healthcare professional).

Interestingly, it isn’t just the types of foods and the ratios of those foods you are eating and how efficiently your body can adapt or absorb those nutrients that can affect the nutrient levels in your body, the nutrient levels within the plant foods themselves can fluctuate depending on all types of factors including what soil the plants are grown in (which means the information obtained in food lists is really just a guide and once you go looking you’ll find they vary a bit depending on the source you are looking at), how old they are, and how you prepare them.

So how much iron do you need in your diet?  As you can see from all of the above it depends on many factors such as (but not limited to): your gender, your age, your life stage eg. If you are menstruating or pregnant, how heavy those menstrual periods are? Do you have a food intolerance? What is the soil like that your veggies are grown in? How do you cook your iron containing and vitamin C containing foods (and do you eat them at the same meal?) What is your diet like (how much iron containing foods, the amount of iron inhibitors and iron enhancers do you have in your diet and lifestyle) and what is your current iron status like? Each of these factors play a part in finding out what what your body might need. It’s not a simple question to answer.

I often see queries on various social media pages or blogs in regards to people seeking help for their children who have been diagnosed to be low in iron. When it comes to kids I think there are some key factors to keep in mind…but we will talk about that next time as it ties in with the next nutrient I want to talk about – Calcium.

Disclaimer! If you think you (or your child) might have some iron issues, discuss these with the appropriately qualified healthcare practitioner, (naturopath, dietician, doctor).