As it is the winter solstice tonight, I thought it was the perfect time to bring out and re-vamp the old Ginger/Ninja Bread recipe, I used to make with an old housemate (who was a fantastic cook). 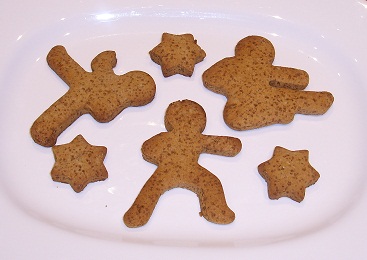 A few years ago though, I developed them into “Ninja Bread” for my friend Anne who is unable to tolerate ginger which is unfortunate because naturopathically ginger is a fantastic herb. Health-wise we use it as a circulatory stimulant, for its warming properties, as an anti-inflammatory and as many pregnant women (including myself) found out – as a valuable anti-nausea. So my chat with my friend got me thinking and wondering what spices you would have if you couldn’t eat ginger (because I love love love ginger bread). Anne told me some alternatives (such as Allspice and Chinese 5 spice). At the same time, a friend gave me these adorable cookie cutters and so liking the thought of using “Asian spices” (ok, I realise that ginger is an Asian herb used in both Japanese and Chinese cooking, and both countries also influenced ninja development so technically using ginger still makes them Ninja Breads) but  I thought it was a good opportunity to convert my old ginger bread recipe to dairy, soy and gluten free.

Since then, I have learned some new cooking techniques and some new ingredients which have helped make this the best incarnation of the recipe yet as it no longer relies on a margarine for the fat base and also I have been able to reduce the sugar content. So with out further ado, begin baking -if you dare!

This recipe has no added: gluten, dairy, soy or ginger (unless you use ginger in place of Chinese 5 spice). This recipe contains coconut oil.

At Christmas time I make these in star shapes and sprinkle them with gluten-free icing sugar and give them out as gifts, or I take them as a plate to share when going to a friends house.