I promised to talk about things that “healthy diets” might be doing that are contributing to your child’s low iron levels. (So my disclaimer here is that you have actually had a blood test done with your doctor to determine that the iron levels are low and that other causes have been ruled out and the doctor believes it is a nutritional deficiency. Please don’t assume that your child (or you) are low in iron based on this post, if you are at all concerned, it is very important to get it checked out with your doctor first).

Ok… So Why am I interested children with low iron? Well last year after a pretty horrible year health wise, and trying all types of things including antibiotics, steroid creams, herbal creams, a low salicylate diet and changing products we used, all to find out what was causing the persistent and worsening nappy rash on my daughters backside and other health issues, I asked our integrative GP to check my daughters iron levels (she agreed it was worth looking into). Well, it turns out my daughter had low iron (and this was before we went plant-based).
How did this happen? And how could we be moving toward a plant-based diet if we were iron deficient? Furthermore why was I seeing posts from other mums on healthy forums asking the same questions? It made me wonder, is our healthy diet contributing to low iron levels? And if so, is there something we can do ?
Well it turns out that there are a few simple things you can consider which might be affecting your child’s iron levels.

How much iron-containing foods and enhancers of absorption do they really eat?

In addition, it might seem really obvious, but even if your children do like the iron-containing foods are they actually eating enough of them to make a difference (and in addition enough of the vitamin C containing foods to help maximise that absorption)? Eg. My daughter loves spinach, but she only eats a few leaves at a time which doesn’t equate to her daily intake.

What is filling up those little tummies?

This next point might also seem ridiculously obvious,  but here I go…. kids only have little tummies. Here the big question is: what is filling up those little tummies?
One thing to consider is whether or not you’ve recently changed from commercial enriched products to organic or gluten-free products (which might not be enriched) (we did this by going from the iron-enriched baby porridge to regular organic instant oats and in our situation that 5mg per serve made a difference). So if you have changed products recently, make sure you check the labels (and compare with the previous product) because the new products might not be enriched and so your child is effectively still getting the same caloric intake (full tummy), but may be missing out on the extra nutrients the previous food was enriched with.  (By the way breads and cereals are the major source of iron in the diet – even for non -vegetarians in Australia with meat accounting for only 20% according to Saunders et al., 2012).

Lastly, lets talk about milk and calcium. In the last post we discussed the inhibitors of iron absorption… Calcium and milk were both listed as independent inhibitors of iron absorption. So what this means is, even if your child is dairy free (like mine) but they are having a milk substitute which is enriched with calcium – (my daughter now has soy milk enriched with calcium) this can also contribute to low iron levels  in 2 ways:

Calcium calcium calcium
So this brings us to the topic of calcium… is there any nutrient out there with a more loaded discussion than calcium? Do you need it or don’t you need it?

Lastly, of all the aspects of the calcium discussion, the thing I find frustrating is that most of the lists of calcium containing foods are generally dominated by either dairy or soy fortified foods or salmon (not very useful if you don’t eat these things)! It is really quite difficult for the average consumer to find information on non-fortified non-dairy sources of calcium (and I don’t mean infographics on social media sites). Well, lucky for you, I’m not an average consumer…so when I come back next fortnight, I’ll give you a table with the top 25 non-dairy and non-fortified foods which contain calcium (that you are likely to find in an average supermarket) eg.daikon radish rates well, but I’ve never seen it in my local supermarket;-).
Activity:

Before we look at that list, lets start looking and taking note of what sorts of fortified foods you have in your house at the moment. 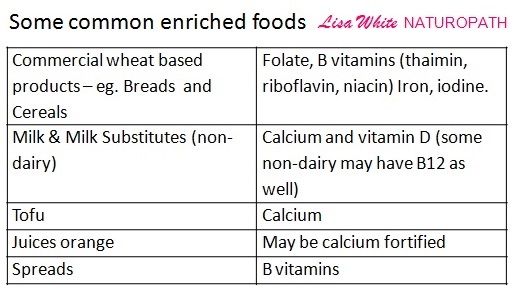 While you’re doing that, I’ll go and prepare the list….the story continues next time…until then have a great fortnight!