Last newsletter I promised a list of 25 calcium containing foods that were free of all of the things that usually appear on calcium lists… dairy, enriched soy and salmon, well once I started I couldn’t stop at 25 so I’ve given you 35. I wish I had this list years ago!!

There are some interesting things on the list above… Do you see them?

How much do you need?
Before we discuss these points, let’s put the above list into some context first. How much calcium do we need? Over the last few weeks I’ve referred to RDIs and upper limits. If you haven’t heard this term before, this is what RDI means:
RDI stands for Recommended dietary intake and it represents the average daily dietary intake that is sufficient to meet the nutrient requirements for 97-98% of individuals in a certain life stage and gender group (http://www.nrv.gov.au/introduction.htm).  In the USA you might see this written as RDA.
The RDI is based on the EAR which stands for Estimated Average Requirement and it represents the average nutrient amount that is sufficient to meet the nutrient needs for half of the individuals in a certain life-stage and gender group (http://www.nrv.gov.au/introduction.htm).
So basically, the RDI’s are sufficient for most people some people actually need less than this to remain healthy, but a 2-3% might need a bit more. Check out the table below for the calcium RDI’s. 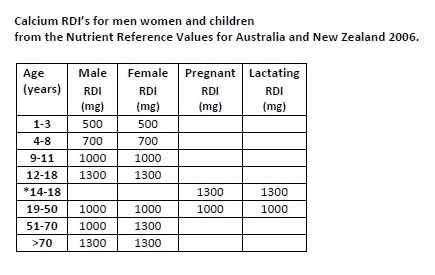 Putting the list of 35 foods into context: Servings and consequences.
In the above table I listed all the foods from the resources I looked at which provided 100mg of calcium per 1 cup serving (and I added in a couple more that came just under, but were probably still present in the average diet and easy to get from most local supermarkets like frozen broccoli or chickpeas).

So lets look at a serving size…
1 cup of dried mung beans are looking like a pretty good source of calcium… the only problem is it is dry . Generally when cooking legumes you’ll soak them and by the time you’ve cooked them, they’re about double the amount you started with. Legumes are a great source of fibre… eg. They’re pretty filling, some people, eg. Children would find it hard to eat that many legumes in a day let alone in a serve. So for the practical amount of calcium in mung beans, consider how much you are actually likely to eat.

What come’s with the nutrient you are interested in?

Another thing to consider when looking at the servings is what comes along with that amount of a particular food, eg, olives are also high in sodium (especially when considering some of the brine they are prepared in), or tahini is also quite high in fat, the amount of calories in a cup of tahini is huge. Lastly, with spirulina, in order to get that much calcium, you’re likely over-doing a number of other nutrients (I wouldn’t recommend a cup a day!). So when it comes to the above list, be mindful of what else you’re getting in a serving of that size. Think about total calories, fat, sodium and other minerals or vitamins which might be over-consumed.

The last observation I’d like to begin to discuss is the discrepancy between the “fresh and cooked” or “cooked from frozen” veggies. I collated the information in the above table from data published in various texts (referenced under the table and in the reference list below). There were some discrepancies between those texts for the same food which most likely arose from where those references originally obtained their data. Some different sources of nutrient data include nutrient databases eg. America uses the USDA nutrient data base (as the books below are written by American dieticians they’ve referred to that), In Australia we have a couple too one is NUTTAB for example. Other sources of nutrient data include various scientific papers (based on experiments which determined the nutrient levels within foods in the experiment published). Generally another  reason for differences seen between the levels of a nutrient in the same food might be due to the soils they were grown in, the time of year they were picked, and the way they were prepared or measured.

In terms of the above table, eg. the differences between the cooked and raw vegetables, some other things to consider for example are that you can fit a lot more cooked spinach in a cup than you can raw spinach which may account for the difference in calcium amounts per cup also.

Until then….I’m going to go and take the above list and the list from last week with our fortified foods, to estimate how much calcium we are getting on average and to see how it compares with the RDI and whether we need to look at taking advantage of a few of the fortified foods, or making a conscious effort to eat more of the foods in the table above.